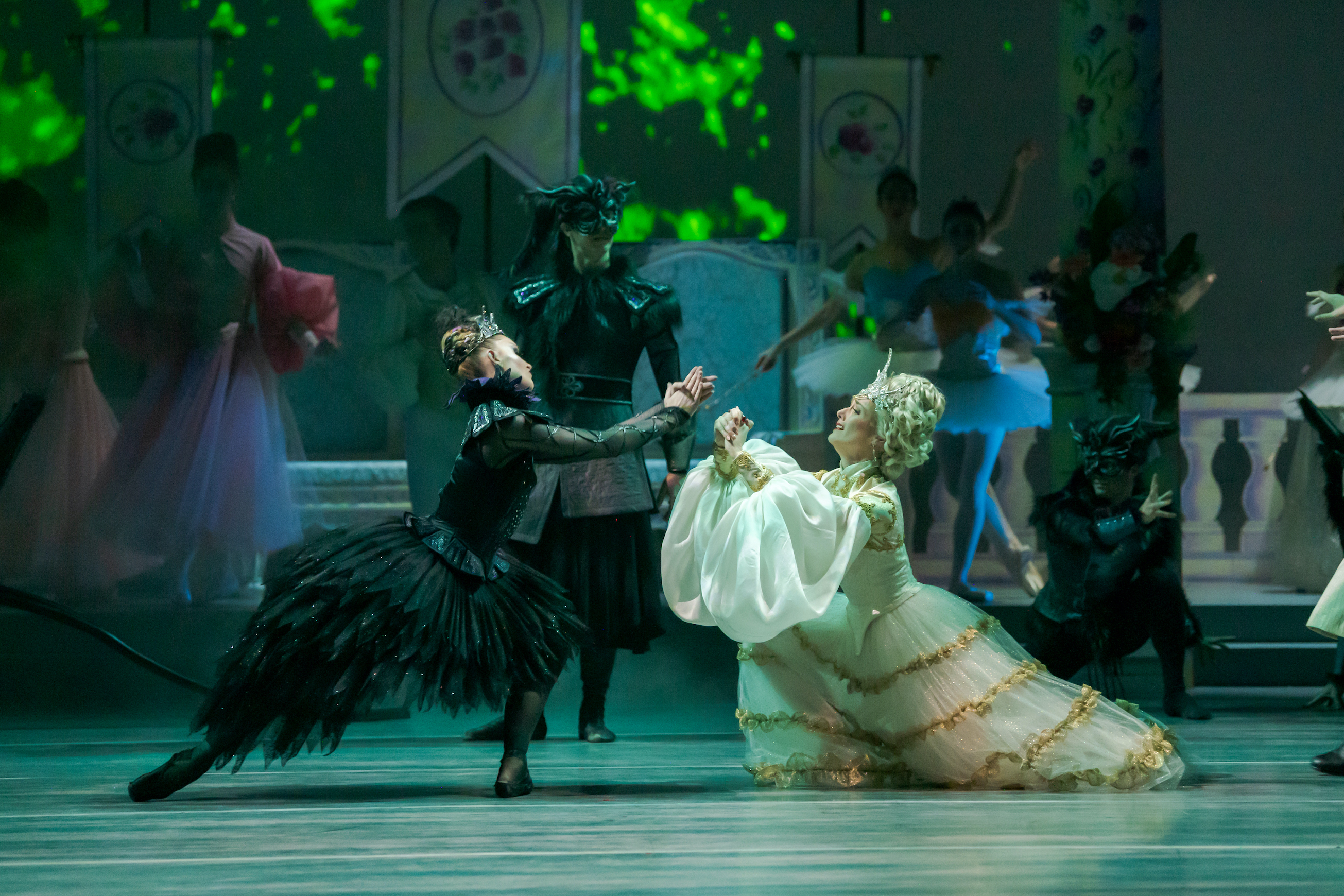 “Art is an act of defiance.” Thus, from pandemic dictated restrictions has emerged RNZB’s production of The Sleeping Beauty. To experience this elegant but deadly struggle between Love and Hate, Generosity and Egotistical Evil, Wellingtonians packed the Opera House. With trumpet blasts, vigorous drum rolls, and a spirited rendition of Tchaikovsky’s soaring score, Orchestra Wellington, under the disciplined baton of Hamish McKeich, fuelled our anticipation. Twice.

The first Act, the Christening of Princess Aurora was explained in rhyming couplets projected onto the closed curtain topped by a crown and roses (each subsequent Act was explained in a poem projected onto the curtain). The curtain rose to a subdued set design, not quite the glittering, extravagant opulence of some former years. A comedic Master of Ceremonies, Loughlan Prior, ordering the children and others in his delightfully bumbling fashion, established a warm conviviality amplified by the arrival of fairies in an array of pink, orange, blue, turquoise, purple, green and yellow, partnered by cavaliers. Their six ethical gifts were presented with elan, particularly by Honesty and Joy, Lara Flannery and Cadence Barrack, respectively. Gaiety pervaded the scene with the arrival of ladies and gentlemen of the Court, the Lilac Fairy and her attendants, and the serene Royal couple, Clytie Campbell and Nicholas Schultz.

Against a backdrop of bubbling slime, the hate-driven Carabosse, Kirby Selchow, black attired and in superb form, leaves her home, arrives at the palace, terrifies everyone, pronounces a curse on the baby, transforms celebration into horrific trepidation and departs borne menacingly aloft. Kirby’s energy and malevolent artistry infused each peaceful scene she entered with contrasting tempestuous negativity. She stamped an indelible impression on the audience right to the final Act. The Lilac fairy gently ameliorates the curse of death to a sleep lasting a century and the scene ends with tiny lights of hope in the backdrop. 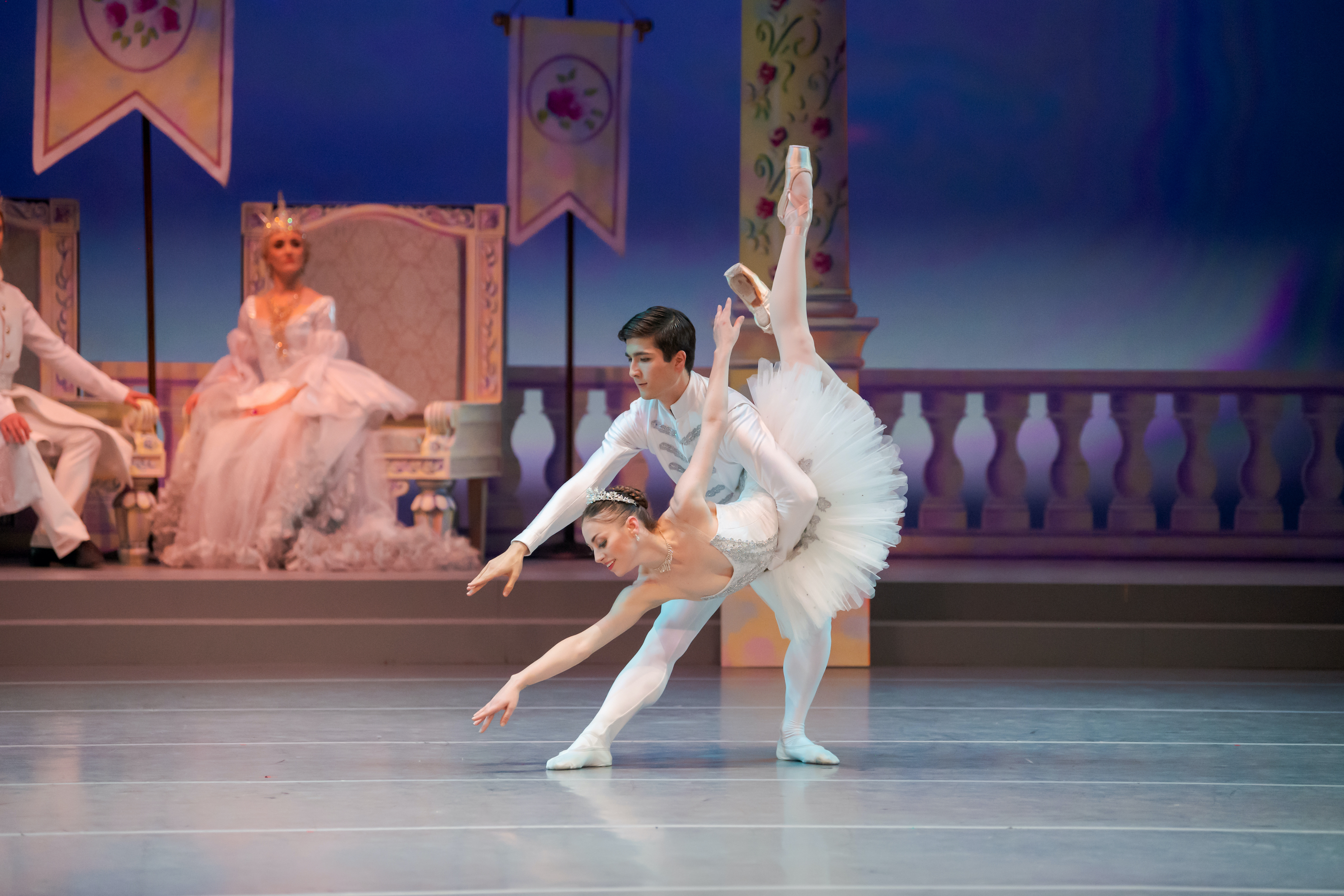 Kate Kadow’s Princess Aurora, presented at her 16th birthday party, executed a polished, assured performance which echoed the choreography danced by Fonteyn. Kadow’s dancing throughout was consistently strong. Prince Desire, Laurynas Vejalis, in the Wedding scene was precise, and technically excellent. He could now well afford to project more winning charm having awakened the princess with a kiss of the hand (in these covid times. The audience gasped; robbed of their expected classical, pre-covid kiss!) Kihiro Kusukami’s Bluebird and partner, Katherine Minor’s Princess Florine, executed jewelled performances, engaging to watch. Kusukami’s soaring, seemingly effortless leaps placed him in a class all his own for athleticism and elegance. Convincingly portraying a Duchess-as-temptress, the White Cat and a lady of the Court, Leonora Voiglander exhibited versatility and stamina in these three contrasting roles. She is one to keep an eye on. Attention to elegant lines, especially in the lifts, and her characterisation, gave Sara Garbowski’s portrayal of the Lilac fairy a sense of magic. Yet I yearned for the Lilac fairy to be the sweet but assertive obverse side of the destructive Carabosse ‘coin’.

The Sleeping Beauty will build in strength, attending to telling details, as it traverses Aotearoa; in costuming for example, perhaps adding petticoats to the Queen’s imperial mother-of-the bride wedding gown and refining others. The joy of Spring portrayed in the Kingdom of Roses by movements, can profit from visual amplification, such as floral touches in the costumes of the Lilac fairy’s attendants. The public’s support of the Arts is crucial to its preservation during a world-wide pandemic. The obvious effort by the dancers, displayed in the inventive, Petipa-modified choreographic style they employed, coupled with Orchestra Wellington’s empathetic interpretation of Tchaikovsky’s music under acclaimed conductor Hamish McKeich, promise balletomanes a richly complex evening to contemplate.

The Sleeping Beauty - Royal New Zealand Ballet
+ Text Size -
Do NOT follow this link or you will be banned from the server!