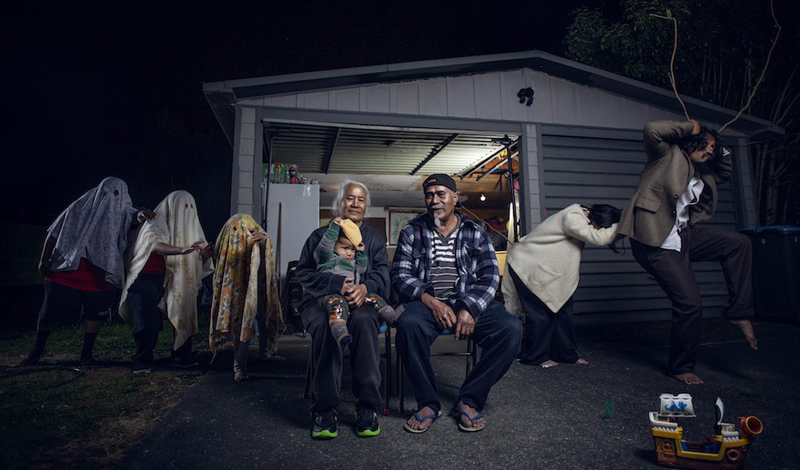 The festival celebrates what it means to be of Tairāwhiti and of Aotearoa. It reflects, celebrates, and reinforces the importance of, people and place, and further affirms the region’s strong position in the creative landscape of Aotearoa.

The rich, diverse, thoughtful and thought-provoking Tairāwhiti Arts Festival 2019 programme is outlined below.  For the full programme and ticketing information, please visit www.tetairawhitiartsfestival.nz.

Māui Pūtahi is Te Tairāwhiti Arts Festival’s opening event, created by local powerhouse director and artist, Teina Moetara, and taking place on Friday 4 October at Marina Park. From the time Māui used the wisdoms of Murirangawhenua and founded this land-mass, lifted Hikurangi from the sea, and captured time and light, Te Tairāwhiti has been the home of challenge, synchronicity and innovation. Set at the confluence of the Taruheru, Waimata and Turanganui rivers, this event - part performance, part ceremony, part interactive experience - is an invitation to all to explore the edges of the Tairāwhiti flair and officially open the Festival.

Kicking off the opening weekend, Eastland Community Trust presents Up, Up and Away! Manu Aute Kite Day – a free event for all the whole whānau taking place 12-5pm Saturday 5 October at Gisborne’s Soundshell. Featuring a line-up of local and global talent, from kaihaka to kaumoana (performers to voyagers) and including Anika Moa performing some of her famous Songs for Bubbas, the day will be full of musical performances. Arts, crafts and workshops will provide plenty to do, while those fascinated by the arrival of the waka flotilla will be able to celebrate Gisborne’s international voyaging community and acknowledge the connections across Te Moana Nui-ā-Kiwa.

A new production of the brilliant stage adaptation of Samoan New Zealander Tusiata Avia’s powerful poetry collection Wild Dogs Under My Skirt will headline the Pacific work. Transforming Tusiata Avia’s words and experience with the sometimes painful intersection of New Zealand and Samoan cultures in her life, this popular play, performed by an all-female cast of six formidable Pasifika actors, has been re-energised under the direction of Anapela Polata’ivao.

The Festival will present the world premiere of Henare; a story inspired by Henare Waitoa. In this new play created by Waitoa’s mokopuna - award winning playwright Hōhepa Waitoa and producer Hone Kouka - waiata, kōrero, and contemporary and traditional pūoro tell the story of one of Ngāti Porou's most prolific composers, from the kitchen of a homestead in Tikitiki.

Audiences are invited to join Dave Dobbyn, Anika Moa, Annie Crummer, Maisey Rika, Rob Ruha,Teeks and some of New Zealand’s most iconic musicians Under An East Coast Moon, as they share their music on the magical shores of Tūranga-nui-ā-Kiwa. With a special guest appearance from contemporary Hawaiian musician Kaumakaiwa Kanaka’ole, this is a night of wonderful waiata for the whānau.

Manawa Moana, an installation in the War Memorial Theatre from 4-20 October, presents a supersized manifestation of global consciousness about the proliferation of plastic in the ocean and in our everyday life. The giant manawa (heart) represents our ‘feeling about plastic’, the giant roro (brain) represents our ‘thinking about plastic’ and ngākaunui (big heart) represents ‘engaging our hearts and minds’ to find the solution.

Following a sell-out premiere season in the 2018 Auckland Arts Festival in partnership with Silo Theatre, Cellfish will make its Tairāwhiti debut. Starring celebrated actors Jason Te Kare and Carrie Green, this funny, insightful and gripping work takes the audience behind the walls of a New Zealand correctional facility and into the minds of its residents.

Meremere is a breath-taking, compelling and generous work performed by critically acclaimed dancer, Rodney Bell. It merges spoken word, music, dance and multimedia design to tell Rodney’s story – from a childhood spent on the pā under the eaves of the Te Tokanga-nui-a-noho, to scaling the heights of an artistic career and living rough on the streets of San Francisco. Meremere explores the human response to the ebbs and flows of fortune, the transformative journey to inner strength and peace, and the immutable call of home.

In 1967, Aretha Franklin dropped her smash-hit version of Respect and the world was never the same. The song became an anthem for a strong, confident woman all over the world and is as potent now as it was then. In Te Tairāwhiti Arts Festival’s Respect! Annie Crummer, Bella Kalolo, Ria Hall and Jackie Clarke will sock it to everyone in a concert that pays tribute to one of the world’s most inspiring musicians.

From award-winning company Trick of the Light Theatre, The Bookbinder is a story of mystery, magic and mayhem, taking place in the intimate Library Room of Gisborne’s Poverty Bay Club. Delightfully dark and full of whimsy, The Bookbinder beautifully blends puppetry, shadow play, paper craft, storytelling and live action to tell the tale of a bookbinding apprentice.

The Dome provides the backdrop for an intimate gig by pre-eminent singer and performer Reb Fountain. She’s performed and recorded with Neil Finn, Marlon Williams, Don McGlashan, Tami Neilson and Julia Deans. She was once described as “Lucky Strike cool and Jamesons raw, with a voice born of fire and river run, mountain strong and feather soft.” She is certainly one of the most understated but unbelievably talented musicians in Aotearoa today. Her album, Hopeful and Hopeless, won the Tui for Best Country Album/Artist in 2018 and Reb took out the 2018 APRA Best Country Song for its title track.

Te Ara i Whiti is an enchanting installation of light sculptures and artwork popping up from 6 to 13 October. The people of Tairāwhiti have a magical relationship to light. It’s the place where the sun first shines, where people are first to be energised its rays, and where the light dances and shimmers across the horizon. There is no better way to honour that than to leverage the transformative power of light and turn Marina Park into a playful and charming space for children young and old.

Taonga Moana celebrates the ocean as taonga. The national chamber choir of Aotearoa, Voices New Zealand, will join forces with multi-talented Kiwi composer Warren Maxwell, eclectic Finnish composer Jaakko Mäntyjärvi, and multimedia artists Tim and Mic Gruchy for a spectacular choral celebration of our oceans and reminder of our duty of care as kaitiaki.

The WA 165 spent most of its working life between Gisborne and Motuhora. Now semi-retired, the heritage train will steam to life for a special Festival experience. In All Aboard, the WA165 will take guests to and from Muriwai while enjoying lunch, a few surprise performances, and the unique experience of riding the only remaining WA class train still in operation.

I Ain’t Mad At Cha is a new New Zealand play about a young Māori boy’s relationship with rhymes and the whole “being Māori” thing. Kiwa’s done with being judged – worst of all by his own people. How do black American fullas who live 20,000km away make him feel more understood than his own whānau and iwi do?

A Synthesized Universe by Anthonie Tonnon is a breath-taking, 360-degree, multi-sensory experience in which audiences go on an interstellar journey through the known universe. Alongside custom animations by Andrew Charlton, critically acclaimed musician and producer Tonnon explores the vastness of the cosmos through surreal storytelling and live music performed on a 1968 electric guitar and Wellington-designed synthesizer-sampler.

Curated by Mere Boynton in partnership with Tairāwhiti Museum, Music for Intimate Spaces is a situational musical installation. Guests are invited to move through the spaces - C Company Memorial House, Wyllie Cottage and the SS Star of Canada - at their own leisure, and enjoy the sounds and music of place and time.

Tupua Tigafua is a highly accomplished dancer and one of the most ingenious storytellers of his generation. After dancing with some of Aotearoa's creative elite, including New Zealand Dance Company, Black Grace and MAU, Tigafua has masterfully created an enchanting, playfully intriguing and visually stunning dance show, Shel We?, inspired by the works of renowned American writer Shel Silverstein.

In Tukutuku, students with and without disabilities from Gisborne Girls’ High School will collaborate to create a programme of original works that meld live music and dance, under the leadership of a team from the inclusive Jolt Dance Company and Christchurch Symphony Orchestra.

Vai has many states. It falls as rain and runs as rivers, it ebbs and flows as oceans and bubbles in hot pools. Vai is an intuitive installation of femmage exploring the spirit and visual characteristics of water, created by Lina Marsh and taking place free-of-charge at Lawson Field Theatre.

Play readings are a chance to experience the next New Zealand classic-in-the-making; to say you were “there in the beginning”. Acclaimed director and actor, Anapela Polata’ivao will directs a cast of Gisborne locals in a rehearsed reading of Barbecue by Robert O’Hara - a cruelly funny comedy about the dysfunctional O'Mallery family who come together over a barbie to stage an intervention. This super-relaxed reading is hosted at beloved Gisborne local, Smash Palace, and the ticket price includes good ol’ Gizzy kai – sozzies and salad.

KE Design, in partnership with Tairāwhiti Museum, will present NATIVE VOICES: Ko au, ko mātau - I am, we are - an art exhibition which reinforces an indigenous legacy and challenges the impact of a nation’s ‘dual heritage’ on our Māori future.

Show Me Shorts is New Zealand's leading international short film festival and has become a popular addition to the Gisborne arts calendar. This programme will include some of the best new short films from New Zealand and around the world, featuring a diverse collection of cultures and voices.

Every great idea starts somewhere. Join local voices, playwrights, songwriters and authors as they preview new works in development, in the Festival’s Sneak Peeks. See, hear and experience new pieces at varying stages of readiness. Gain insight into the creative process, understand the artist’s inspiration, and be amongst the first to discover a new wave of inspired, innovative, imaginative creators.

Already announced is the world premiere of Witi’s Wāhine, the new New Zealand play written by Nancy Brunning and based on excerpts from Witi Ihimaera stories, including Parihaka Woman, Medicine Woman and Waituhi. Mere Boynton, Roimata Fox, Ani-Piki Tuari and Ngapaki Moetara will star in this theatrical celebration of some of the most formidable and inspirational wāhine Māori characters to have graced the pages of New Zealand fiction.

The inaugural Festival Director Tama Waipara says, “Anchored in Tūranga-nui-ā-Kiwa/Gisborne, our festival celebrates our whakapapa connections right around the coast, from Raukokore to Rangitukia, and Manutuke to Muriwai. This Festival will centre itself in the heart of the East Cape, but stretch its arms far and wide; globally acclaimed, proudly local and unashamedly accessible.

“We will celebrate the first stories of our whenua, and our whakapapa connections across the Pacific. We want people to know who we are and where we come from. We want to champion the stories and voices of our place amidst the most glorious backdrop of our home, Te Tairāwhiti.

“Celebrating our regional creativity is the best welcome we could offer for all New Zealanders and our overseas visitors. Understanding who we are at home defines how we welcome the world. We’re very proud of the journey we’ve taken so far, and even more excited to welcome people to our place in October,” Waipara says.

New Tairāwhiti Arts Festival Inaugural Programme Revealed
+ Text Size -
Do NOT follow this link or you will be banned from the site! Original generation time 2.0978 seconds. Cache Loaded in: 0.0005 seconds.