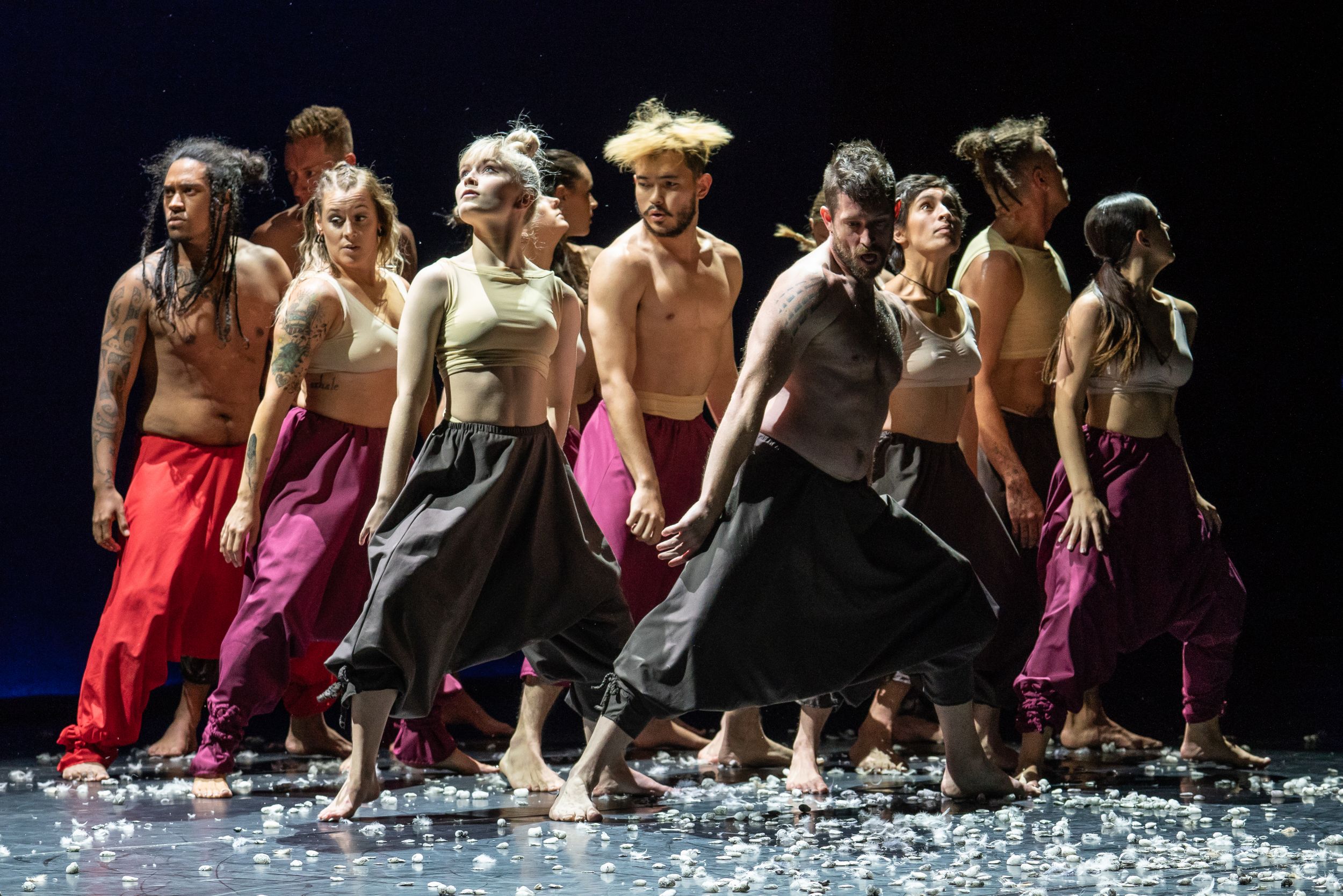 As sound engulfed the audience and light flashed like the morning sun revealing itself behind rocks and trees, I felt my heart ruffling its feathers in my sternum. I was transported into another time and place, grounded yet elevated. Awake.

The stage is steeped in ritual. Stones and feathers were on an alter like table at the front and what appeared to be a huge pile of feathers was centre stage.

This was the initiation to the performance Hōkioi me te Vwōhali, from spirit eagles land. It has been a collaborative performance by Ōkareka Dance Company from Aotearoa New Zealand and Exhale Dance Tribe based in Cincinnati, USA. Taiaroa Royal of Ōkareka met Missy and Andrew Hubbard of Exhale Dance Tribe in 2008, when the idea for collaboration was seeded, but it wasn't till 2014 when Taiaroa was in Te Wai Pounamu (The South Island of NZ) that he had the idea of telling the story of the Hōkioi (Haast’s Eagle) and it’s connection to the Vwōhali (Golden Eagle). Both birds were steeped in myth, austerity and messengers to the spirit realm. One historical, one alive, it lent itself to the relationship of tuakana and teina that the choreographers shared.

Early on, a pātere acknowledging the eagle’s whakapapa and their mana in the spirit world and the world of light, te ao me te pō. This felt like whakawhanaunga for the audience to understand the history before stepping into the dance. At this point the movement of the dancers is evident but it is Maree Sheehan’s incredible soundscape that is most present.

The dancers’ impeccably embody bird like movements - both the power and majesty as well as the deft head movements and angled arms suggesting wings. There is a theme throughout the performance of dancers on the ground, moving, balancing and at times tussling with dancers becoming airborne. This push pull dynamic is an acknowledgment of Papatūānuku and Ranginui and the movement of birds between the physical and spirit worlds. 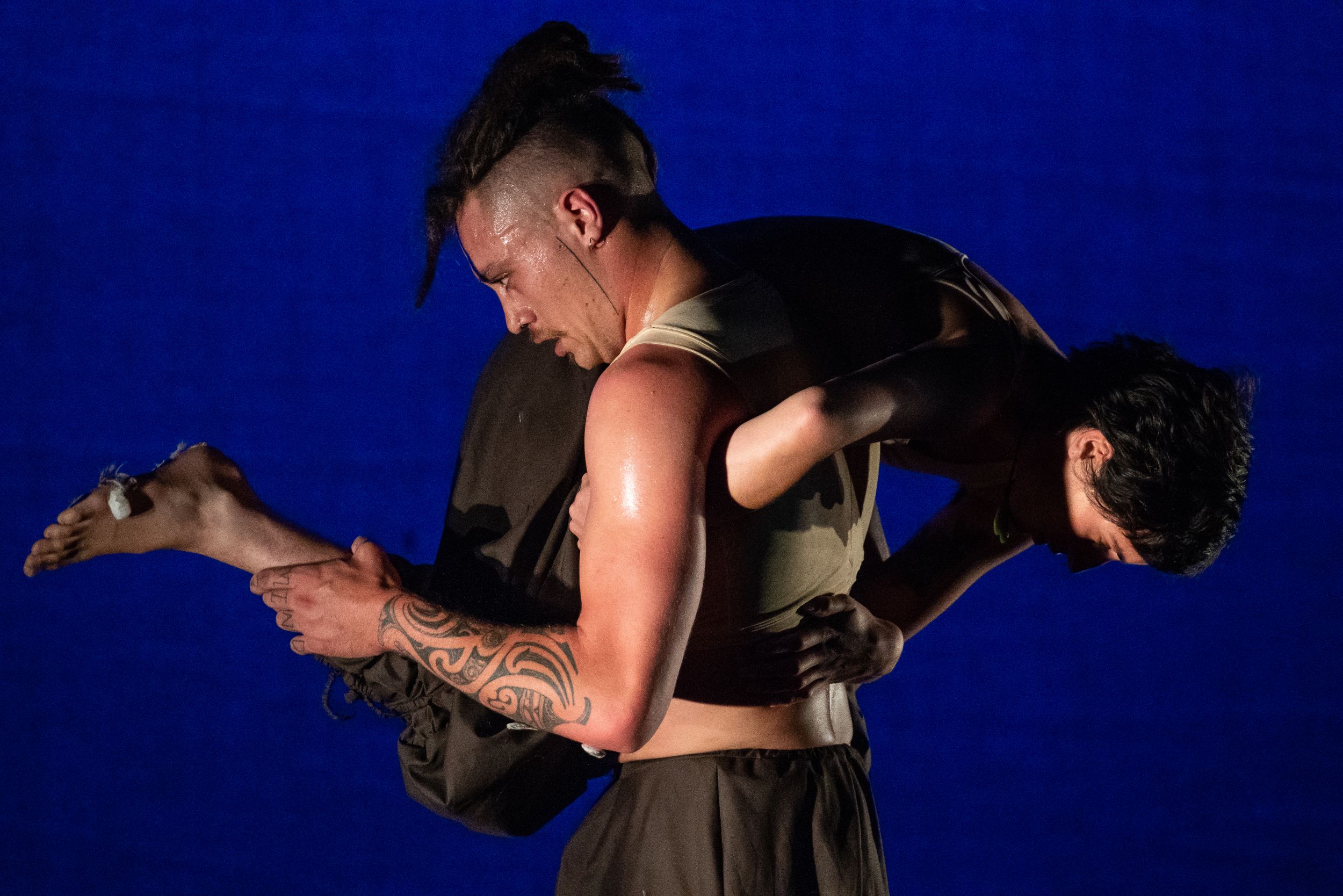 The arrival of breath-like sounds moves into traditional cries and drums from the Dukuktv (Cherokee). The choreography is exquisite, with controlled lifts and graceful bird-like fluidity, which moves to more traditional feet stomping and war-like stances and  jerky avian rhythm. The lighting by Vanda Karolczak is otherworldly.

Missy is Native American and both Taiaroa, and Tui Ranapiri- Ransfield whakapapa to Ngāi Tahu Māori where the Hōkioi was revered.  Knowing the choreographers are indigenous, that they stayed with the Duyuktv people and heard stories and received the blessing for this work, clarifies that ensuring cultural safety has been paramount in this inquiry into how both cultures revered these wild graceful birds.

At one point the tauparapara ‘tēnei au’ takes us with Tāne-Mahuta to the baskets of knowledge and it is like the dancers are on clouds. The flow through indigenous movement of the eagle dance and haka, to western contemporary and ballet with refreshing hip hop and breakdance elements is effortless.

This journey  wakes us up into the mythical world of raptor birds, carrying us to the heavens, and alighting on the earth again, with the final piece culminating many of the motifs and ideas of the previous dances into a fast paced, joyfully grounded celebration. This performance was entrancing and clever and left an imprint on my hōkioi heart.

Hōkioi me te Vwōhali - Ōkareka Dance Company and Exhale Dance
+ Text Size -
Do NOT follow this link or you will be banned from the site!