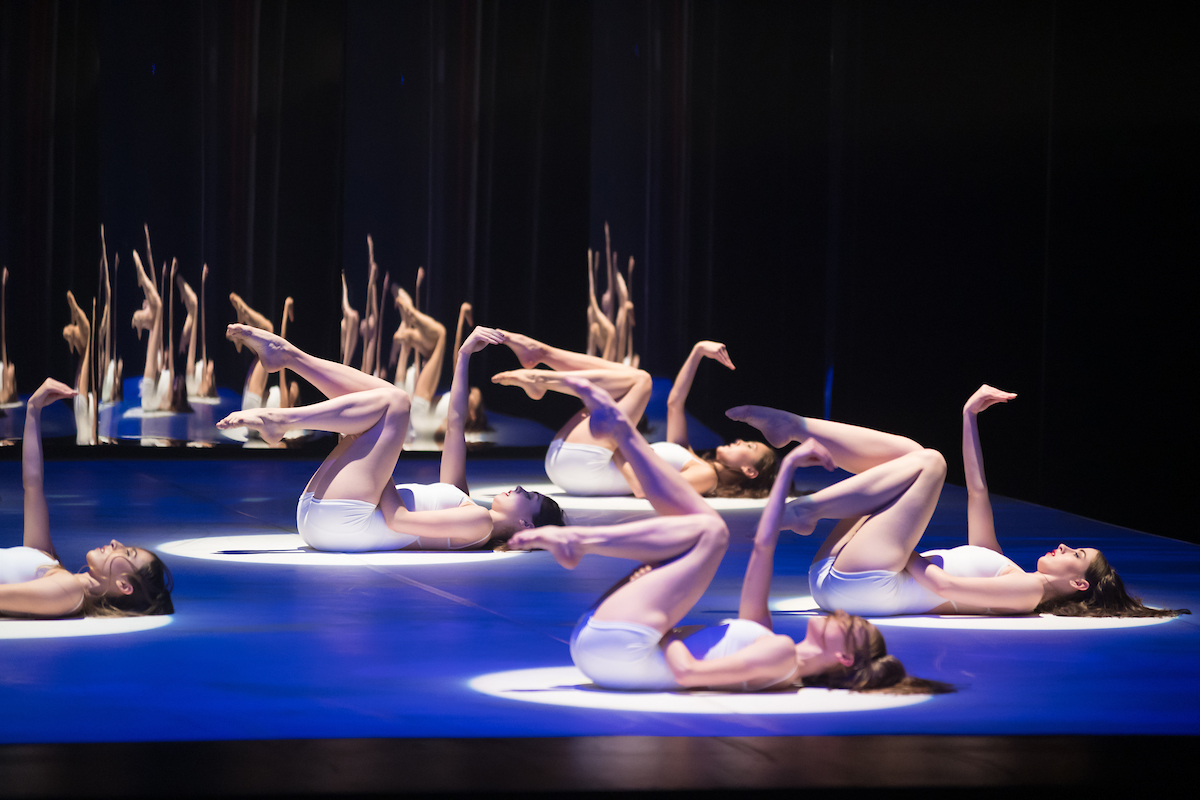 “Truth depends on your angle of vision.” Having viewed the ballet from seats (low) in the stalls, I left the opening night’s performance of Black Swan, White Swan dissatisfied with the narrative line and emotionally conflicted in spite of the technical excellence of the dancers and Radacovsky’s arresting choreography. I decided to view the work again but from the gods. That second performance, impressed me with its brilliant production, the inventive re-exploration of humanity’s familiar struggle for integrity, sanity and autonomy and clarified reasons why this inspired “Swan Lake” had clashed so uncompromisingly, with its universally loved, revered, classical antecedent.

The title Black Swan, White Swan prompted misguided assumptions by some, about the nature of the ballet’s conflict. These misconceptions were fuelled by: the picture of a female swan in the promotion, the names of the original protagonist and villain, Siegfried and Rothbart, the familiar, beautifully orchestrated Swan Lake score and the setting which included a beguiling, glistening, ripping lake. This modern ballet though, explored an heroic struggle that gave no quarter, between a male cancer patient and his alter ego. Defying cancer’s death-challenge Siegfried chose to live vibrantly, passionately, aesthetically, responsive to female eroticism but never subjugated by it. At war with himself, no external force such as the classical Rothbart, was empowered to destroy this Siegfried’s hope, unlike the sorcerer’s power in Swan Lake.

Radacovsky’s use of contemporary technique’s fluid floor rolls, angular lines of swans lying on their backs with flexed feet, open knees and swan’s beaks; lifts by men of each other, ballon-displaying jetés in the male corps’ virtuoso dances, a visual feast of lifted ballerinas, effortless turns, tours en l’air and footwork to tempi that seemed slightly quickened, all attested to The Royal New Zealand Ballet Company’s classical grounding. Certainly the pas de deux of the black and the white swans were strongly engaging, with the black swan’s sensuality utterly alluring as interpreted by Kirby Selchow, and by Caroline Wiley on Saturday. Yet it is the males, having entered through the door to insanity, locked in their exhausting battle, fighting on the white frozen lake, in the private ballroom of the couple, in a hall of mirrors, on a floor of black depression, the alter ego fitting himself into half of Siegfried’s jacket, all of these prise from the mind empathy for those mentally tortured relentlessly. Both Rothbart's, Shaun James Kelly’s and outstanding Kihiro Kusukami’s, command our respect for refusing to veer into trite theatricality.

Viewed from the gods, the eclectic audio-visual, lighting and set designs gave the ballet coherence and symbolic depth. One easily saw the gaiety of the birthday party on a teal-striated floor, the beach goers’ scene on a polka dot stage, a backdrop lit blood red and forbidding with fractured images on mirrors and the mesmerising blue lake. The ballet poignantly ended with the drenched, floored, unconscious Siegfreid, danced in Saturday’s matinee by Laurynas Vejalis, circled in “blessing” by the spotlight of a swan. I had missed seeing many crucial symbolic details by being seated low, far forward in the stalls. No, Siegfreid was not sitting disconsolately on the side of the stage. Viewed from above, he was sitting lakeside.

The minimal swans’ white costumes of the females which were abbreviated bodysuits, emphasised the demanding physicality of this interpretation, a far cry from the expected romantic lyricism of the classical original with ballerinas in tutus.

During the intermission on Saturday a woman in front of me complained, “I’m confused. I don’t understand...” I explained the conceit which began with the doctor giving the heart-stopping news at which Siegfried fainted, twice. When the performance concluded she whispered, “I’ve never cried at a ballet before, but this one, this one made me cry.”

Black Swan White Swan - Royal New Zealand Ballet
+ Text Size -
Do NOT follow this link or you will be banned from the server!