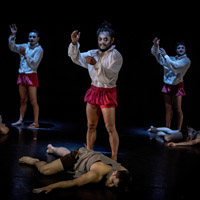 The Absurdity of Humanity offers two highly contrasting works with a broad collective appeal. The whopper of a title suggests that the state of being human is flawed, perhaps tragically, perhaps comically.

Australian Choreographer Lina Limosani presents Whispers from Pandora’s Box, a significant reworking of a piece premiered by the New Zealand school of Dance in 2011.

Hapless Chris Ofanoa unwittingly unleashes a goonish clan of killer clowns from an incandescent box which, with a bit of theatrical jiggery-pokery, ominously slides across the stage. Led by the masterful Carl Tolentino and resplendent in smeared clown face, white shirts, and red pantaloons, the clowns look like the hybrid children of Queen Elizabeth I and Pennywise, the nightmarish character from TV mini-series IT.

Shrieking with laughter at their own machinations, the clown’s hyper-violent antics are juxtaposed against childlike merriment. An effectively mashed up vocabulary of slapstick, mime, and contemporary movement drives the absurdity. The cast gives it their all, barely pausing from go to whoa. Ofanoa’s mesmerizing portrayal of demonic possession, Tolentino’s menacing entrance, and a darling lazzi where some relentlessly victimized chicken characters try and fail to escape are highlights, in part because the ideas are given space and time to breathe amongst the chaos.

The programmme reads that Limosani’s desire is to find unique ways to bridge the gap between narrative and contemporary dance, but to my mind, there is no fundamental duality to bridge. Touted as ‘A theatrical exposition on the dichotomy of good and evil within human nature’ WFPB is a well crafted and wonderfully danced piece of contemporary performance. A fun, high-spirited romp for sure, but an exposition on human nature? Not really.

Consisting of five pole-like structures, the set extends upwards like trees, antennae, or perhaps filaments of fungus which serve as totems, feeding stations, and habitats. Columns of light by Jo Kilgour extend the structures, making their terminus indeterminate.

Identities emerge from the chorus and are in turn assimilated back into it.

Chrissy Kokiri, first amongst equals, seems attuned  to a state of flux as if experiencing the world for the first time, arms feeling the air like palps, always testing and searching. Emily Adams prostrates herself, her spiderlike body curling and twisting unnaturally as if in reverse. Xin Ji and Lucy Lynch’s duet of body origami underpins some astounding group symmetry. In the deepest plié ever seen, Katie Rudd drags Tolentino sideways with a pelvic tractor beam, while newcomer Eddie Elliot jerks, prances and collapses like an autonomous marionette.

Jason Wright’s muscular score moves with the dancers. It could be described in terms of mass, direction, and texture. It alters the space as if sound were made of matter, as if it has its own body.  Astounding!

The world of Matter is a total triumph of collaboration, light, sound, and ultimately… vision.

The Absurdity of Humanity Review
+ Text Size -
Do NOT follow this link or you will be banned from the server!