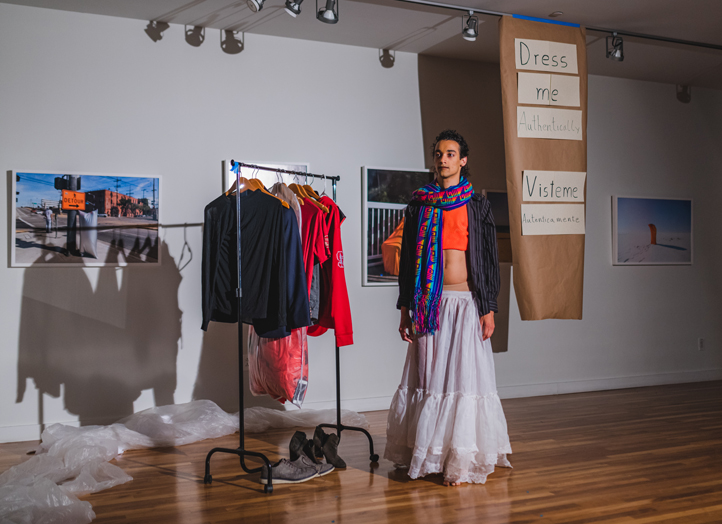 Atamira Dance Company Artistic Director Jack Gray, of Te Rarawa, Ngāpuhi, Ngāti Whātua, Ngāti Kahungunu and Ngāti Porou descent, is a well-known Kiwi choreographer, facilitator, teacher, writer and lecturer. He shares with us his experience of travelling to California to attend a gathering of Indigenous choreographers.

In late May I attended Indigenous Choreographers at Riverside (or ICR 2019) an annual event presented by the University of California, Riverside Department of Dance. I have been a key participant of ICR’s global and regional movement since 2012, where artists, academics and Indigenous communities have gathered together to reflect, think, perform, present, and share their ideas.

Over the years, I have witnessed how ICR has continuously bubbled, brimmed, and breathed life into academic, ritualistic, and political spaces through diverse voices and collective embodiments. Co-directed by Shea Murphy and María Regina Firmina-Castillo, this year’s ICR was subtitled ‘Queer-y-ing Indigenous Dance’ coordinated in collaboration with EXPLODE! Queer Dance Festival’s programming.

Often a co-facilitator of opening ceremonies in the past, this time I was able to enjoy my role as one of the manuhiri (visitors) - appropriate given that Riverside, CA is traditionally acknowledged as Cahuilla land and territory. Wandering down the familiar plazas towards the venue, I noticed the uprising warmth from the concrete, as the Northern Hemisphere Spring invited a quick physical adjustment having flown 12 hours direct from wintry Auckland to Los Angeles (plus 1 hour drive to Riverside).

PEOPLE WERE GATHERED, STANDING UNDER TREES, SITTING ON PUBLIC BENCHES, MAKING LITTLE CONGREGATIONS LIKE PUDDLES OUTSIDE THE CULVER CENTRE. 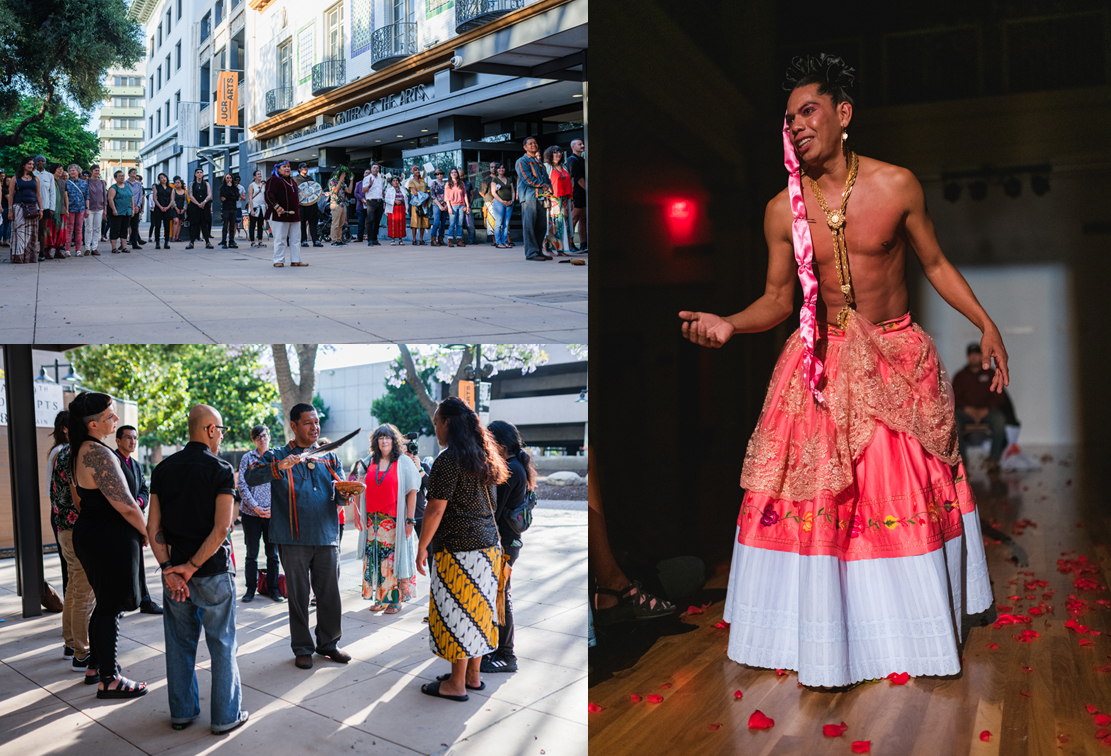 We listened to the words of the Cahuilla who were there to welcome us through Bird Singing, the name of their traditional songs, drums, and chants. They invited men to come and dance in front of the women, which also included ‘Two-Spirit’ people (identifying as both genders, or the opposite gender to their sex). These themes of inclusion and wellness were echoed in the Opening Reflection by Shash Yázhí Charley representing the traditional Indigenous Dilbaa / transmasculine community, and were interwoven throughout the proceedings of the multi-day festival.

THE PERFORMANCES FEATURED IN THE ICR SHOWCASE THAT FOLLOWED WERE BY THREE QUEER, LATINX DANCE MAKERS WHO BROUGHT MELODRAMATIC FLAIR, HIGH THEATRICALITY, AND A WILD RAWNESS INTO THE ROOM.

Javier Stell-Frésquez’ Mother the Verb is a solo interactive work that “wrestles with the toxicity of our relationships in this post-colonial world”. It led the audience into a small alcove space where a rack of clothing was hanging, awaiting participants to try on or to dress the performer. We then moved into the main hall space and assumed a spectatorship of the soloist, whose highlight moment was a cascading plastic sheet that billowed around Stell-Frésquez, eventually swallowed up and buried beneath by members selected from the audience. Next was another solo, N.I.M.R. (Negra India Morena Roach) by Fabiola Torralba exploring the “identity of a mixed race Afro-Indigenous descendent through social dance movement”. Set as a ritual, with a traditionally dressed dancer in front of an altar of fruit, flowers, and a mirror, Torralba deconstructs expectations of ‘representation’ with Cumbia, Hip Hop, and Booty dance cultures grappling with migrant and diaspora bodies.

The culminating work was Réquiem para un Alcaraván by Lukas Avendaño whose solo practice is borne from the extremities of hardship and artistic genius within their homeland of Mexico. The work is a cultural expression of Zapotec culture, through ‘muxheidad’ which embraces homosexuality, gayness, and same-sex marriage with certain contradictions of gender roles. This celebration brings in the vivid sensuality of “female rites of passage” and the man-woman dances of a traditional wedding. Avendaño has mastery in evoking the many elements of metamorphosis, hilariously demonstrated with “Jesus” a spectator plucked out of the crowd to be the mate. There are colourful costumes, glittering and spectacular, there are ribbons twisting and flailing through the space, and there is epic wonder as we are drawn irrevocably into the tornado. 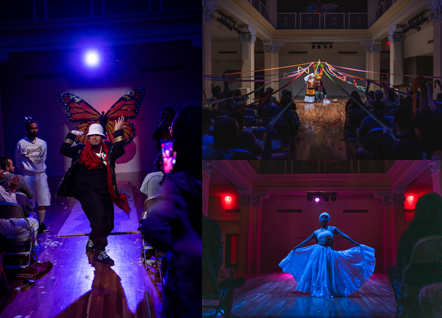 Afterwards, as is particular to ICR, there was feedback offered through invited guest speakers and I was lucky, as a representative of Atamira Dance Company (and Aotearoa), to be one of the respondents. I took the opportunity to acknowledge ancestors, travel, the ocean, and togetherness. I honoured the Bird Singers and the people of the land, and the opportunity to be with this institutional leaning into shared Indigenous space. I thought internally about how these dances might never be seen in Aotearoa and why that was. I questioned why non-English languages are perceived as inaccessible perhaps, and how experiencing something completely different to what we usually see in Aotearoa is so culturally rewarding.

Whilst at ICR, I had the opportunity to teach two classes. The first was ‘Movement for Joy’ at Infuse Dance Studio, sharing ways of holding space as a community from my practitioner point of view. I have been developing this philosophy at Corban Estate Arts Centre, where Atamira is based and have taken the opportunity to share it at different locations including Hawaii, California, and Arizona.

WITH THE WARMTH OF THE DESERT AND FUN VIBES OF THE QUEER COMMUNITY, THE ENERGY OF THE CLASS WAS AMPLIFIED BY THE INNATE RHYTHMIC FIERCENESS OF LATIN MUSIC AND VOGUE-ESQUE MOVEMENTS, CHANNELLING FROM THE EXCITEMENT AND LAUGHTER OF THE DANCERS.

By incorporating and blending Indigenous viewpoints we balanced metaphoric energies through a shared sense of deep, sacred reverence.

The next day I co-facilitated a walk through Riverside with Elaine Talamaivao, an ex-pat New Zealander teaching Pacific cultural values through her organisation, Tala Mai Moana. We had a chance to notice the many non-green urban spaces (it is after all technically a desert) and ended up exploring cultural material based on Haka, taught through traditional call and response methodology.

I also attended ICR Moving Forward, with a select group of artists, academics and cultural leaders co curating a think-tank/dialogue that led to the drafting of some ICR core principles. This allowed us to have a key moment to collectively write and realise some significant outcomes that have previously come from ICR’s decolonising approaches to dance and the academy. Sustainability was a common thread that enriched the many conversations that bled into other networking moments (at dinner, in-between shows, or afterwards at the local pub).

EXPLODE! Queer Dance Festival reverberated with drag, post-modern dance, anti-racist themes and another incredible solo work by Lukas Avendaño; No Soy Persona. Soy Mariposa. Concluding on the final night, P. Dante Cuauhtémoc captured the microphone to call out the people “who have helped our time together come to life” to come onstage and strut their stuff (Ballroom Vogue style) down a makeshift runway. This, alongside all the other activations of ICR 2019, provided much needed recalibration for Two-Spirit Inverted Legends, Statements & Stars, Artists/Co-conspirators/Witnesses to be duly centered and celebrated (in a burst of glitter, sweat, wigs, and lipstick) in the world today.

QUEER-Y-ING INDIGENOUS DANCE
+ Text Size -
Do NOT follow this link or you will be banned from the server!