Hansel and Gretel by the Royal New Zealand Ballet 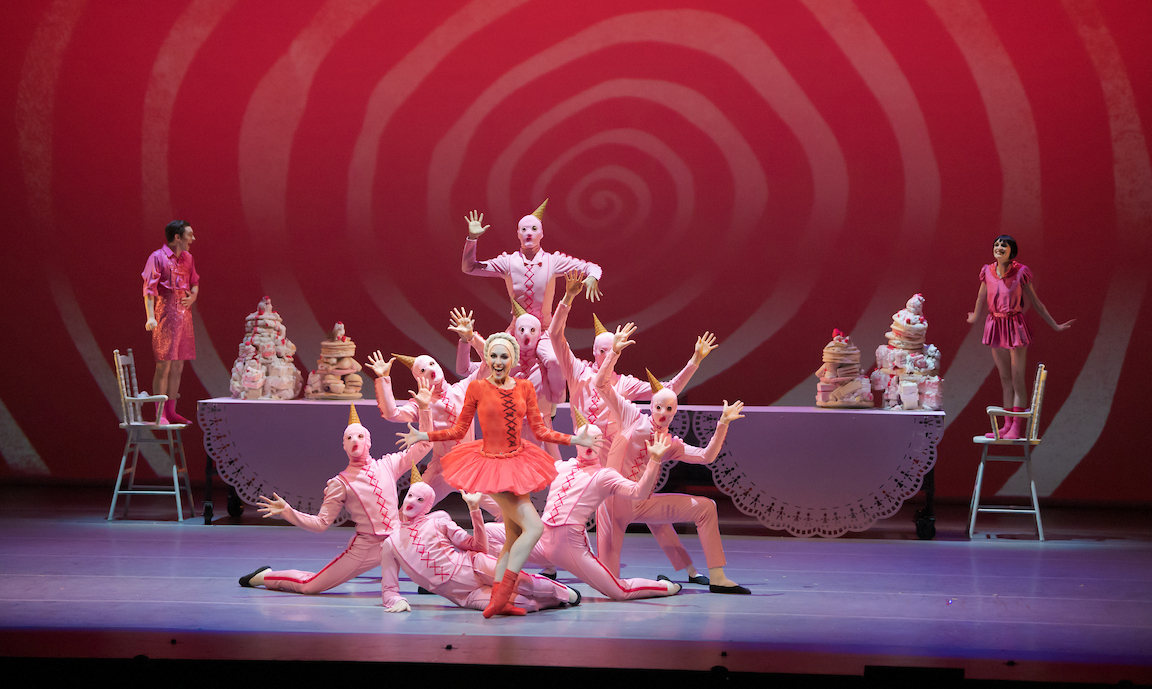 Infusing fresh vision, vibrancy and enjoyment into a well-known, gruesome folk tale, choreographer Loughlan Prior countered with a dizzying style palette; the 1920’s Charleston, a smooth waltz and flapper era vaudeville; he spiced it with can-can, chorus line routine, early Broadway sassy Jazz interpretations, and a sly, knowing touch of ‘men-in-pink’, nod-nod-wink-wink German cabaret. Yet he anchored the ballet in the anticipated Classical scenes of the glistening corps supporting the shimmering prima ballerina Mayu Tanigaito. In excellent form she produced polished pas de deux and consistently enchanting portrayals of the Queen of the Dew Fairies.

The short male pas de trois, other male appearances (more was yearned for), and the children’s scene as forest birds tidying away the bread chunks were winningly entertaining. Not to be overlooked was Paul Matthews, the transformed witch in menacing black, dancing as the ‘evil witch in her element’. He captured that rich amalgam of humour and horror. Reminiscent of the traditional ‘ugly sisters’ in Panto who are danced by males, his dancing took the cake.

Deeply moving was the soul soaring pas de deux of the parents executed by the technically superb Mother, Nadia Yanowsky and seemingly ‘effortlessly’ supportive father, Joseph Skelton. Moving from despair and rejection to a triumphant lift of reconciliation and united determination, theirs was a nuanced performance of fine intelligence. Then they proceeded to search for the children with hope and mutual support.

Under girding this diamond of a ballet was Claire Cowan’s delightfully complex, colourful, imaginative, seamlessly interwoven score; one of the strengths of the ballet. It gave coherence; gifting myriad passages for an array of choreographic expression. Claire Cowan’s brilliant first full length score ‘by a female composer’ for this RNZ ballet, it is to be hoped, holds promise for future commissions. Under the superb baton of Hamish McKeich, Orchestra Wellington moved our emotions with their usual and (one or two) unexpected instruments. Our ears danced and our emotions swirled to Claire’s music.

This made-for-the-Festive-season crowd pleaser placed on Kirby Selchow’s Gretel the artistic demand for inventive, courageous, canny, opportunistic and affectionate but combative (towards her brother) interpretations of this folk heroine. Her Gretel’s breadth of characterisation, placed on her a burden, to respond intuitively to social slights, poverty, hunger and seduction, with her child’s resistance. This burden she shouldered well. Shaun James Kelly’s Hansel’s focus on food and his limited awareness of cannibalistic danger made him a comic foil for his insightful sister.

Diluting this work of tension, fear, breath taking deception and hints of death, at key moments, gave viewers some respite. A tall Buster Keaton-esque “Sandman” gliding reassuringly, calmly; guarding the sleeping Hansel and Gretel, exhausted in the forest where the trees spill shadows of knives and forks made the tempo less frenetic.

The stage, costume, set and light designers contributed in a visually rich collaboration to the enjoyable depth of the Ballet. The seductive sweet concoctions in the gingerbread house, each more extravagant than the last cake-and-ice-cream delight, may have held the young viewers enthralled. All the same, there was something for everyone to enjoy.

Hansel & Gretel - Royal New Zealand Ballet
+ Text Size -
Do NOT follow this link or you will be banned from the server!