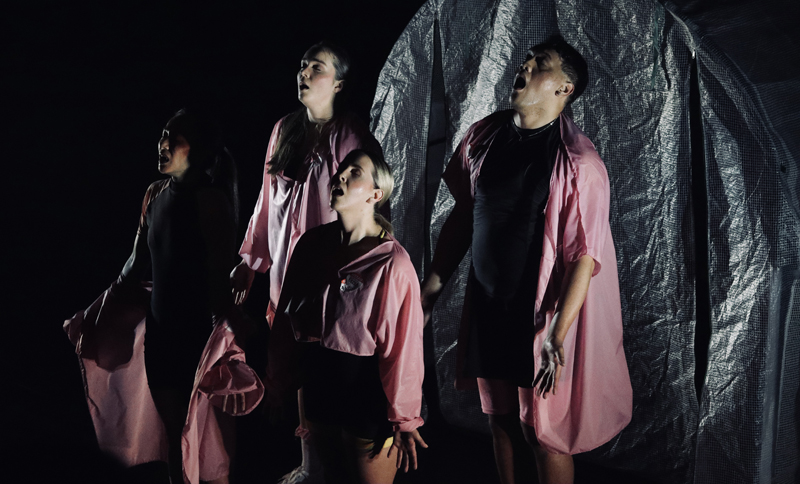 With an informed sensibility, EDWA2020 gently debuts the rich potential that experimental performance practice has to offer in Aotearoa.

How do you translate a global perspective into a local one?

How do you speed backwards to explain a milieu lengthily observed?

What is experimental? What is dance in Aotearoa? What makes it different?

Building the festival from scratch two years ago, the second iteration of Experimental Dance Week Aotearoa continues to express the generosity of Alexa Wilson’s approach to curation and direction. This week of performances, as with the first festival, continues its vital work in archiving a living history of progressive practice in Aotearoa, and inspiring the next generation of artists to come.

Experimental dance is a field that has existed globally for quite some time. As progressive and transformative as ever, it’s lineage is clear, it doesn’t wish to make any demands upon its future self, but rather, it consumes the idea of ‘challenge’ possessing it at its core. There are no rules in experimental practice, more an ongoing sense of growth. Antagonism, challenge, newness and the progressive are all fundamental to this growth.

Ironically disparite from advisory trend forecasts that posit the experimental as synonymous with the cutting edge, the lack of funding available to support emerging or experimental practice in Aotearoa, has seen most aspiring contemporary practitioners either become part of the diaspora, or rotate in intimate supportive strategies within small communities around the country. Part of why this festival happening is so exciting, is that progressive work typically pushed to the margins, or ostracised completely, finds a way to access the mainframe of visible culture in EDWA2020. Finally given air to breathe, the works that were presented in Tāmaki Makaurau both in this, and the first festival, speak to more than just a liberation of artistic form, but also an aesthetic materiality that is burdgeoing on being entirely New Zealand’s own.

EDWA2020 was championed by a number of things. Firstly the careful curation on Wilson’s part. With deft imagination switches all week, the programme of works played off one another. Whether it was aesthetically, as in Charles Koroneho’s elegant and considered opening living refracted in moments of Zahra Kileen Chance’s ‘Elliptical fiction’, or of a more conceptual form, like the sifted conversation between Virgina Kennard’s monologue and Julia Harvie’s stream of consciousness (literally) unravelling a discussion about work, labour and performance, the connections between different types and ages of practice contextualised the works. Flattering a set of connections, the festival was thoughtfully balanced, the arrangement allowing each artist’s vision to be seen and considered with the workshops illuminating and broadening areas of enquiry.

Alongside Wilson’s directorial gaze other standouts were the suspension of gaze in Kyah Dove’s filmic and dreamily unheimlich piece ‘To Cut a Mermaid’s Tongue’, the nuanced repetition within Jessie McCall’s horticultural tent-come-Noahs Ark-incarnate ‘Daybreak Estate’, and the texture, comedy and sense of play present in Joanne Hobern + Jazmine Rose Phillips ‘Magnificent Violent Sparkles’. Conceptually the neat circlet of Katrina Bastian’s ‘Soliloquy in Sweat’ Berghain-marathon meets deflated-Michelin-man silver suit experience was neat in its medium specificity, especially with the parting gesture of offering a voucher for a free hour of labour to each member of the audience.

It’s quite clear that what EDWA has brought to Tāmaki Makaurau is a refreshing breath of agency. Linking in with the sense of ease performance finds in bigger cities, EDWA2020 has made a space where the scene can begin to question why Aotearoa is different. Loosening the grip of, and teasing the typical, this festival does more than just make a space for experimental practice, it also seeks to herald a new epoch.

Experimental Dance Week Aotearoa 2020
+ Text Size -
Do NOT follow this link or you will be banned from the site!