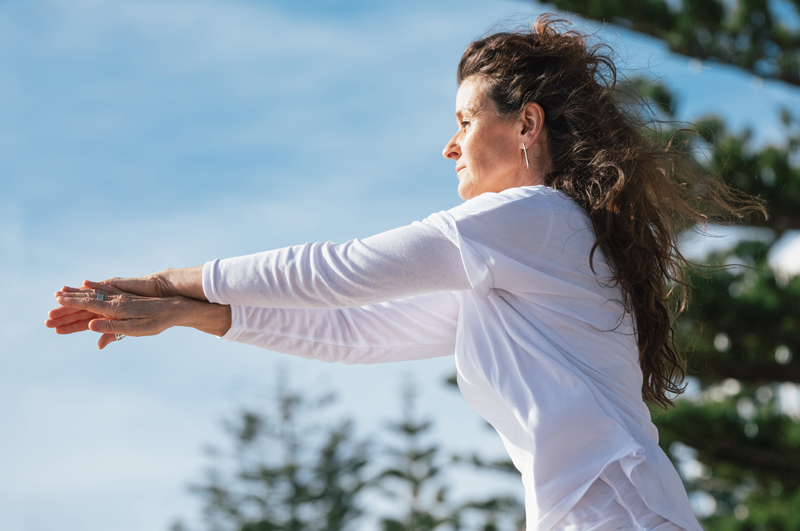 Prime Minister Jacinda Ardern’s maiden speech at the United Nations General Assembly last year inspired Ōtaki-based Anna Groves to put into action an ambitious choreographic project called Keep the Peace – NZ. Even before the horrific Christchurch mosque shootings redefined public discourse in New Zealand, both Ardern and United Nations Messenger of Peace, Dr Jane Goodall, expressed their support – along with hundreds of people across the country who signed up on social media to participate. Her choreographic project (in ‘Flash mob’ style) became the first event during a day of action for peace on Sunday 18 May, 2019.

THIS PROJECT IS IN MEMORY OF ALL THOSE WHO HAVE HAD THE COURAGE TO SAY ‘YES' TO PEACE IN THE PAST, AND ALL THOSE WHO WANT TO ACTIVATE PEACE NOW. I HAVE ALWAYS BEEN A REALLY BIG FAN OF EMPATHY, COMPASSION AND KINDNESS AND FINDING WAYS OF BRINGING REAL PEACE INTO THE WORLD. TO ACTUALLY DO SOMETHING MEANINGFUL, SOMETHING HONEST, THAT REALLY MATTERS TO ME.

From the time I started ballet classes at the age of four, dance has been my first language. Dance stays alive no matter what.

I continued to study dance at both the Auckland Performing Arts Centre, where I was the first solo mum to graduate with a Diploma, and then UNITEC; going on to stage a number of shows in Wellington in between parenting my three children. However, it wasn’t until I returned to the stage, as part of Michael Parmenter’s dance opera OrphEus in Wellington last year, that an idea I had been sitting with for over three years started to move inside me.

During the finale, as I watched Lucy Marinkovich dance in front of me, I felt a creative spark ignite. I had loved the journey I had taken with the other community dancers to be part of Michael’s Sea of Humanity, with Lyne Pringle as our rehearsal director. I loved the realness, the care, the sense of community, the no frills approach and Lyne’s fabulous mantra, “We’re in this together”. No standouts, no solos, no “me, me, me”; just plain, simple unity and community.

I wanted to combine my love of working with the community and ‘non dancers’ with my passion for site-specific work. When I became a qualified teacher, taking a position at Ōtaki College on the Kāpiti Coast, I continued to explore creative ways to stage dance in interesting sites, including an Urupa (graveyard), a pavement, and shop front windows. I recognised sitespecific work as a powerful vehicle that can deliver a message to the wider community.

Peace matters to me. For the past 13 years, I’ve been involved with Nonviolent Communication (NVC). NVC is a powerful model of communication that supports people to connect based on values, both with themselves and others. It’s a practice that shows how real peace takes more than saying nice words. After qualifying as a Certified Nonviolent Communication (CNVC) trainer, I began facilitating workshops and retreats nationally, in Europe and in Asia. I am humbled time and time again how normal people, desperate for change, show up at my workshops from every kind of background.

THIS LOVE FOR PEACE STIMULATED THE IDEA OF CREATING A CHOREOGRAPHIC WORK LIKE THE ‘WHITE POPPIES FOR PEACE’ PROJECT.

After I watched the film, Field Punishment No. 1, about Archibald Baxter and the conscientious objectors during WW2, I was so inspired by the courage he had to say ‘no’ to war, and was horrified by the way he was treated for simply standing up for his values. So, when Jacinda Ardern spoke at the UN last year about the importance of being “…pragmatic, empathetic, strong and kind”, I took action.

I decided to activate a large-scale, one-hour choreographic project, inclusive of all peoples, and to stage it as a site-specific installation around Oriental Bay. Originally, my vision was of 30 people standing around the bay wearing white clothes, moving in different ways. The intention was to be pro-peace, rather than anti-war.

As soon as I set up a Facebook event – Keep the Peace- NZ – people expressed interest, more than 500 within two weeks. It was at this point Melanie Vivian, Chief Executive Officer & Co-Founder of the Jane Goodall Institute New Zealand, contacted me, so I changed the dates to match Jane’s visit to New Zealand. I posted all the movement material for people to learn online, so there would be no need for rehearsals. There were four movement options – from simple standing or sitting along the concrete rim at Oriental Bay to a more complex phrase. From still to restrained, then freed and open to peace. I loved the ease and concept. Simple.

KEEP THE PEACE – NZ WAS NOT A PUBLICITY STUNT, IT WAS ABOUT PEACE, TAKING ACTION AND TAKING A STAND; IT WAS ABOUT SAYING ‘NO’ TO VIOLENCE – NOT ONLY THE LARGE WARS BUT ALSO ABOUT THE SMALLER SCALE WARS AT HOME TOO.

I am so hopeful about running future events in this way. Both ease and an element of surprise were important to me, as I didn't know how many people would turn up.

I wish to thank Quaker Peace and Service Aotearoa New Zealand for their financial support. With their funding I was able to create a resource that will help spread the word of peace and enable Keep the Peace – NZ to become an annual event. Watch this space!

KEEPING THE PEACE THROUGH DANCE
+ Text Size -
Do NOT follow this link or you will be banned from the site! Original generation time 2.3043 seconds. Cache Loaded in: 0.0315 seconds.