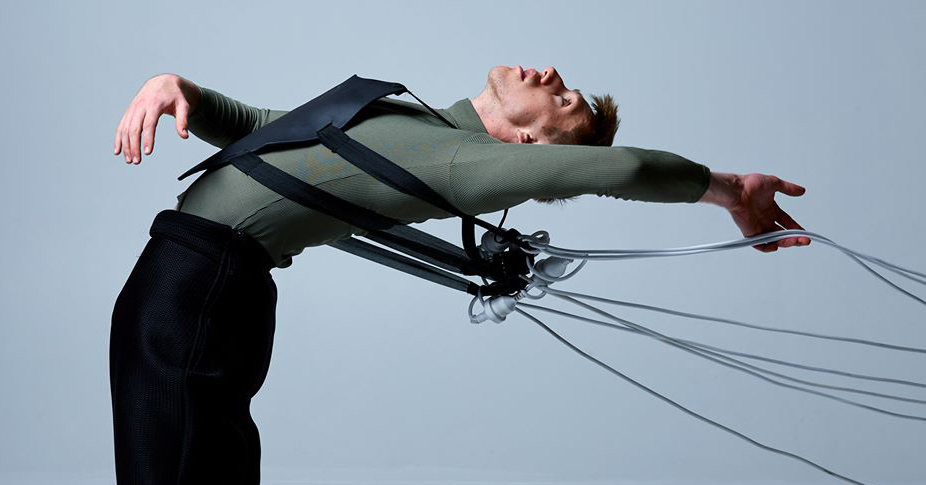 We make dances because we have bodies. We make dances to deal with our matter, to experience a particular feeling of body-joy, to enter into the idea of a knowledge that is immutable, and real, because it doesn’t know what any of those words mean.

Insofar as the dancing-body exists, so too does the techno-body: the locus of seduction and capital. Kit Reilly’s performance Utopia#9 reminds us that to live is to hold it all at once, like cuts that lie parallel in the same flesh.

In Utopia #9, presented at Te Auaha during the New Zealand Fringe Festival, the techno-body has swallowed everything. (The possibility of an outside, too). How do you dance in an apocalypse? How, even, do you live?

Utopia#9 pours flesh-sweat-body-effort in search of an answer with astonishing fervor, but to look for a solution is always already akin to failure.

The performance considers what Saidiya Hartman calls “forms of unfreedom”1 — mechanisms of surveillance, entrapment, and normalisation that we call ‘culture’, or life. The first body onstage is a television, whose appendages (power cords) extend outward to drape over the space. It is the television that dances first, in a compilation (by Eli Cantwell) of historic advertisements documenting the shock of the new. Immaculate housewives and businessmen extoll the virtue of the first home phone, portable camera, and typewriter. Perhaps unintentionally, the video shows us the whiteness and heterosexuality of modernism’s notions of ‘progress’ and ‘advancement’ that determine how we construct our bodies and technologies. Lamentably, Utopia#9 does not reckon with this.

Post-video, Reilly and his dancer/collaborators (Madeleine High, Chelsea DesLauriers) body forth an aesthetics of hyper-virtuosity, in which the delicate and vernacular are blown up to spectacular extremes. Utopia#9 feels like the fatigued underbelly of a theme park, and shows us that the insatiable compulsion to feel good now is the language of contemporary life.

The choreography traffics in a syntax of dynamism that exhausts any will for another way. What will be left when everything has been burnt down, bombed, or infected? So You Think You Can Dance, perhaps…

All three performers are technically masterful. They coolly expunge a dizzying succession of sinkhole-deep lunges and contorted floorwork. Reilly proposes choreography as a technology of excitation, in which ‘hard’ is a synonym for ‘good’.

DesLauriers and Reilly dance a duet of glad-wrap intimacy. Love becomes something-funny-we-used-to-feel, way back when. Languorously, they reveal the vapid performativity of everything imaginable.

Madeleine High ends the duet by entangling DesLauriers and Reilly in a river of power cords. It’s beautifully sad. I imagine the power cords melting down and dissolving into their bloodstream.

What if the body was flesh and blood and bone, but also power cord, Ziploc bag, and typewriter? Anything I write is only ever half-true. It feels good to say NO to an answer, which is also an ending.

Utopia #9 by Kit Reilly - NZ Fringe Festival
+ Text Size -
Do NOT follow this link or you will be banned from the site! Original generation time 3.0792 seconds. Cache Loaded in: 0.0431 seconds.