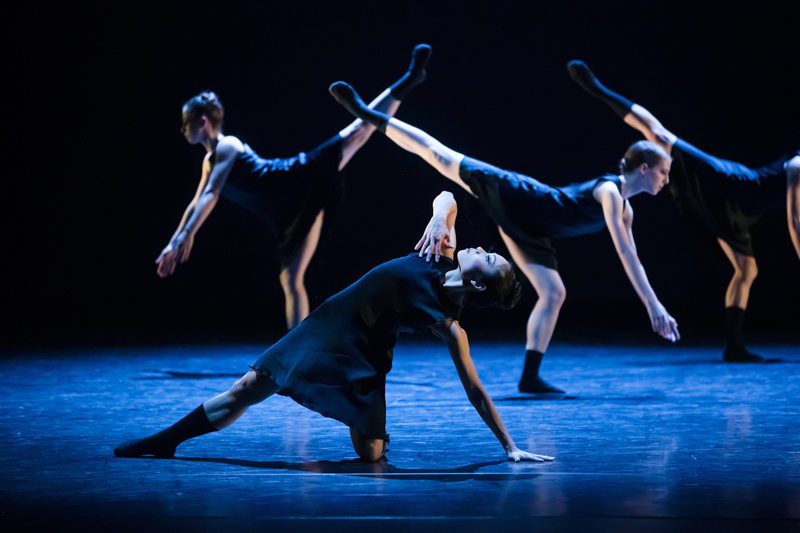 It could be argued that the emancipation of women, followed by the feminist revolution never took root in the ballet art form. The Royal New Zealand Ballet’s (RNZB) Strength and Grace seeks to right this imbalance and put a stake in the ground for the voice of women; in particular celebrating the 125th anniversary of women’s suffrage in New Zealand.  It is a poignant gift in the form of an exquisitely curated, clever, gutsy, programme. Bravo Patricia Barker and Frances Turner for bringing it to our stage.

This dynamically physical evening of dance is exhilarating with dancers freed from the male gaze, to cavort, agitate and speak deeply with their bodies through the lens of female choreographers. There are quibbles around the clunky use of introduction videos and some strange music choices but they do not dilute the power of the evening

Two of the works follow a loose narrative. The first focuses on a family unit of husband, wife and daughter, and the second on the relationship between mother and son. They are, however, still focused in the male realm but from a female perspective.  The stunning chorus of dancers are cleverly used in these two works to extrapolate and expand family and intimate dynamics into a universal expression.

So to Speak, choreographed by Penny Saunders, features strong performances from  Kirby Selchow  and Loughlan Prior as husband and wife, and Caroline Wiley as their daughter. Linear gestural movements are delicate and precise, portraying initmate domestic conversations. These encounters are eventually multiplied,  in the clever use of the chorus to accentuate the meaning of the piece, with negotiations taking place across several family units — the thoughts and conversations of the time creating ripples across communities.  Sheer long skirts  give a period feel but allow for the legs to be seen whilst deep cello music drives an urgent sequence, abounding with choreographic  invention. There is the tried and true male suppression and control as the foreground and background of the stage are enlivened concurrently, with dancers relishing logical and satisfying movement phrases. In the end the wife stands strong above her husband at the kitchen table.

Remember Mama by Danielle Rowe was the favourite work of my mother who accompanied me on the night. She found the portrayal of love that a mother holds for a son over time deeply moving. Nadia Yanowsky, a superb technician, brought great tenderness to the role, with Fabio Lo Giudice as an exuberant young son and Paul Matthews an elegant older version. It created interest choreographically when Yanowsky danced with both iterations of her son concurrently. Once again the chorus was sublime and deployed extremely effectively: armies of mothers and sons in tight unison with exceptional use of space and depth. The costumes were superb with a stunning colour palette and video was used to portray an infant son danced by Shaun James Kelly. 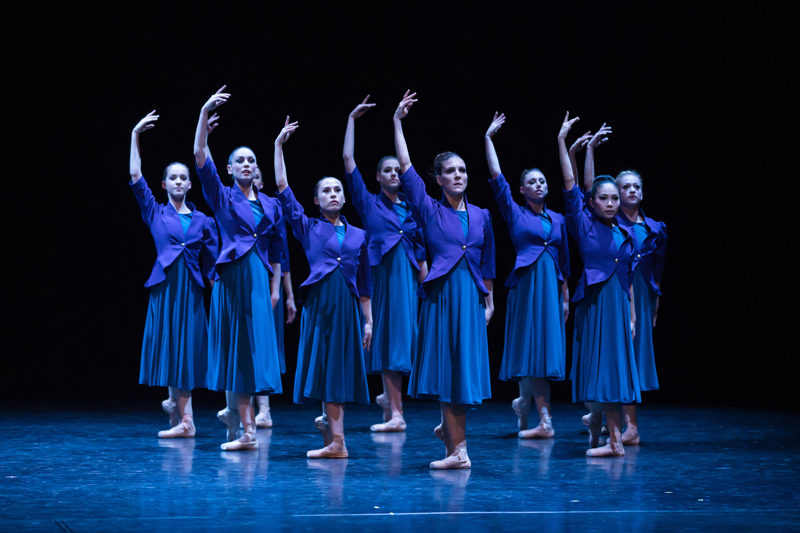 ”I’m from Dunedin,” choreographer Sarah Foster-Sproull says proudly in the introductory video to her work Despite the Loss of Small Detail. What a pleasure to see this homegrown feminist champion holding her own in a field of internationals.  She brings her trademark garnishing of a central character, in this case the luminous Abigail Boyle, with garlands of human hands representing, cloaks, crowns, horns, auras and halos This time they are brushed away impatiently as if the woman is bored with this finery and fussing. Yet in the final image, she is adorned with multiple skins as she courus fiercely, pointe shoes stabbing into the earth, arms raising slowly in triumph and defiance. It is a perplexing piece, at times garish and camp, with men prancing like dandies, complicit in the strident frolic, as if trying to keep up with the women who are hard staring Amazons; they are a killer ensemble with on point politics and intentions. The title suggests that detail has been lost in our current investigation, but despite this, something glorious can rise. Pink pussy hats of protest have morphed into shiny diagonally cut leotards, that are unisex and augmented with faux fur bombers. They are sexy kick-ass outfits (designed by Donna Jeffries and Esther Lofley) that show off the sleek bodies of the dancers to perfection. Foster eschews any kind of narrative in a disruptive mob of action  to flirt with deviant and disruptive statements. Pinkness pushing towards purple, this work is sly and obtuse in it’s subversiveness.  Eden Mulholland’s commissioned composition pounds relentlessly and the genius lighting by Andrew Lees adds incredible texture to the stage, hiding and revealing the dancers in equal measure.

Choreographed by Andrea Schermoly Stand to Reason is a triumph of content and form. Her starting point for movement inquiry came from a pamphlet circulated by the Women’s Temperance Union to support the suffrage movement. It is rich material that has yielded equally rich movement of deep squats, hands slapping the earth, fierce reaches and tightly coiled contractions. These are women of action and clear intention, one gets the sense that nothing can stand in their way.  With pointe shoes discarded their feet can fully embrace the earth, and finally we lose the men from the stage altogether. Any support or hand up comes from within the female ranks — this is refreshing and reassuring. This is a brilliantly realised work with clever use of video text and inventive movement phrases, relished by the all-female ensemble. The final solo by Kirby Selchow packs an emotional punch with immense expressive power and physical capability.

What a pleasure to experience this whirling extravaganza, where the women of the RNZB are celebrated in all their noble, elegant, dexterous glory, through the vision of a talented and erudite cabal of choreographers. Let’s hope it consolidates a new direction of prevalent female voices and fresh talented New Zealand choreographers in the regular programming of this company.

Strength & Grace by The Royal New Zealand Ballet
+ Text Size -
Do NOT follow this link or you will be banned from the site! Original generation time 1.5373 seconds.