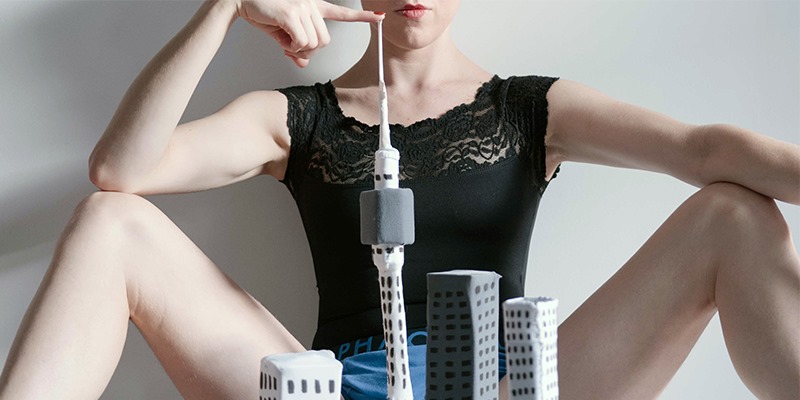 In keeping with its name AKL, BABEL is an uneasy mix of semi-formed images. Sci-Fi, Godzilla and abstract dance jostle against play-acting and adolescent humour. The programme notes ask the  audience to see this performance as an anti-capitalist commentary on SkyCity’s property deals. It  asks us to remember that the city demands bigger and better at the expense of the powerless. Unfortunately it is hard to discern this conceptual idealism in the presented work.

Staged upstairs in the Basement Studio this three act show encounters all the characteristic difficulties of this space. The seats, arranged in an L-shape, minimise both the performance area and, once the house is full, sight-lines. The set-up also presents a choreographic challenge, creating two performance ‘fronts’.

The space has been carefully dressed. The walls are silver; a folded, crinkled layer of emergency blankets reminiscent of '70s Sci-Fi. Off to the side/back of the stage several paper buildings are waiting, the hand drawn windows reflective of where artists fit in the capitalist world, as well as a reminder that effective does not mean expensive.

First, let’s build a city. Blank faced dancers with head torches illuminate miniature cities attached to suit backs. The buildings ripple with each breath and movement. These city-beasts might have come straight from Miyazaki’s imagination. A street is laid out across the stage, small buildings to large before being harvested. Now it is humanity that is the beast. This dance between organic and impersonal feels like it could expand almost endlessly. It is an intriguing exploration of humanity's relationship to the urban landscapes we create. Sadly this image is not given enough time to develop fully before it dissolves into a mix of abstracted gesture and mimicry.

There is a naivety about this show that is occasionally charming but which acts to limit the effectiveness of the choreography. This is most obvious in the second act where the dancers alternate between simplistic emotions and blank faces. Labelled “Underbelly” this act moves from playful soft-jazz into stylized discomfort before segueing to the cheerful sound of what might be either pokies or arcade games. It is an overly extended pastiche, however given a sharper focus it feels like it could become a comment on cultural desensitisation.

The third act is a literal representation of the metaphor of skyscraper as phallus. The jiggling mockery is amusing but it is a familiar image. If this is meant to incite anti-capitalism or anti-patriarchy then pushing further towards shock, or disgust, or anger might allow the audience to engage with the concept on a deeper level.

As a show AKL, BABEL feels like a first experiment. The design elements are clever but this close to the dancers it is easy to see their focus slipping in and out, fighting with the choreography. It also feels like an idea that has, through its development, started to grow away from the original concept. It has the potential to develop into articulate social commentary, just not quite the same commentary that the programme notes describe.

AKL, BABEL by SHIFT
+ Text Size -
Do NOT follow this link or you will be banned from the site! Original generation time 1.5021 seconds.