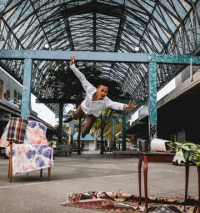 "Aloalii is an endearing storyteller and performer. There is a sincerity and earnestness to his performance that keeps me, and the audience, drawn in"

From hip-hop to contemporary dance, and Polynesian dance to theatre, Goodbye Naughton pays homage to the experiences that have shaped the life of the Ōtara grown artist, Aloalii Tapu.

With astonishing physicality and moving storytelling Aloalii and his close friends and singers Chris Taito and Uati Tui take us through the realities of being ‘the man’ from Ōtara, cultural expectations and postcolonialism. Once congratulated after a show with a back-handed compliment about dancing ‘like a white guy’, he addresses that too.

Given to him by his parents at a time when having a Samoan name was cause for confusion, his first name Naughton was gifted as a promise of safety and future opportunity. Goodbye Naughton rejects that idea, leaving Aloalii free to create his own identity through dance deeply rooted in the Samoan culture he’s so proud of.

Goodbye Naughton was made with the support from Creative New Zealand and Pacific Dance New Zealand.

+ Text Size -
Do NOT follow this link or you will be banned from the site! Original generation time 1.9641 seconds. Cache Loaded in: 0.0508 seconds.